These Designers Are Showcasing Underrepresented Communities to Change Fashion Everyone’s motivation for starting a business is different, but there’s one factor that comes up more often than most when talking with Indigenous founders: community.

Some have created a business in response to challenges faced by their fellow residents—as Birch Bark Coffee and HerBraids did to raise awareness and funds around the lack of potable water on many reserves across Canada. Others have sought to create jobs in their locales, while others still are aiming to represent their community’s heritage on a broader stage.

Unlike most fashion designers, Devon Fiddler’s core mission has always been about her people, not her products, and to help change the public perception of Indigenous girls and women. “The whole purpose of my company was to empower Indigenous girls and women, and it just evolved into a handbag company from there,” she says. Devon’s goal has never been just to employ Indigenous women. She leverages SheNative as an outlet to teach women in her community new skills and increase their confidence. “Our focus has really been on the people, and the stories we can tell through our products.”

The goal is to create opportunities for Indigenous women, so our focus has really been on the people.

Recently, Devon hosted a “design storytelling” group, where she invited eight Indigenous women to consult on what they desired in a handbag to inform SheNative’s current products. “One woman talked about showcasing the success and celebration of Indigenous women and our culture through our products,” explains Devon. “I thought that was a great idea.” Not only is this kind of inclusive approach a way to involve more Indigenous women in the design process, it’s also just good business. Getting feedback early from customers helps SheNative deliver great products people want.

Those products have been central to Devon building a successful, growing business. Since the company launched in 2014, it’s been hitting growth milestones. In June 2019, after hosting pop-up shops, Devon opened a bricks-and-mortar location in Saskatoon.

Learn More: Learn how to start your own online t-shirt business.

Underrepresented groups are shaking up the fashion industry by bringing their culture and ideas to the table—not to mention the runway—and Sage Paul is committed to making sure that Indigenous clothing, accessories, and art is part of the movement. She’s a Toronto-based urban Dene woman and member of English River First Nation who not only designs her own clothing line and produces art installations but is also the founder and artistic director behind Indigenous Fashion Week Toronto (IFWTO), which elevates Indigenous communities as a whole. “It takes the process of presenting it and sharing it for a broader understanding of our culture, and I think we have to do that together,” Sage says.

“Fashion is such a powerful medium to express oneself, to express one’s culture, to express where we’re at,” says Sage. “As Indigenous people, that was taken away from us. We had to cut our hair, and we were put into Western clothing. We were not allowed to do that kind of work.” That history, along with seeing Indigenous culture appropriated by others in the fashion industry more recently, led Sage to launch her own clothing and accessories line. “I was making fashion before seeing the appropriation,” she says. “Seeing the appropriation urged me to focus my attention on creating space for Indigenous representation in fashion.”

Sage has been creating custom, narrative-driven garments, crafts, and costumes for artistic presentation, fashion, film, TV, and theatre. If her story resonates, she has some advice for aspiring founders, especially members of traditionally underrepresented communities in fashion. “If we are really feeling marginalized, there are other people who are marginalized. We can work together and create a space that is undeniable—that people can’t turn away from,” Sage says. 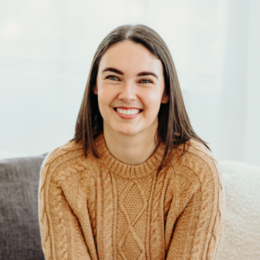 Desirae is a product marketing manager at Shopify, and has zero chill when it comes to helping entrepreneurs grow their businesses.